All PROOF Research on SALE.  Add to your cart for pricing. 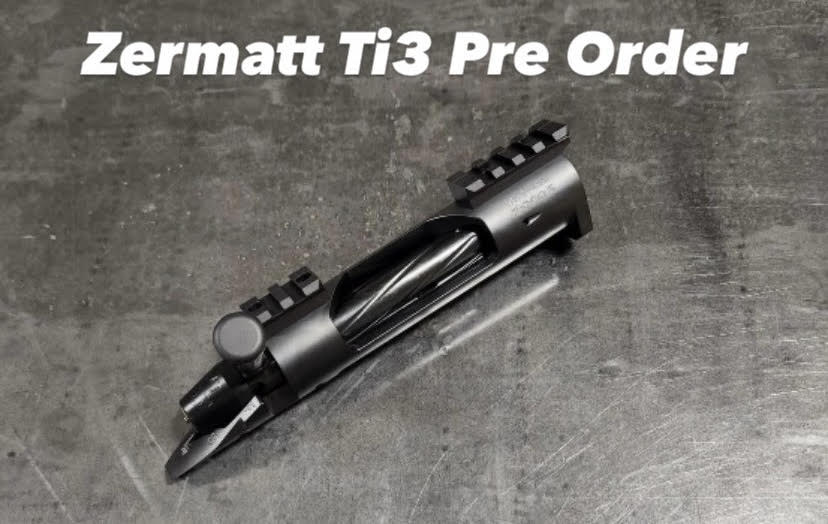 THIS IS A PRE-ORDER.

$100 deposit reserves an action.  The remaining balance will be charged before shipment. (Deposits are Non-Refundable)

AFTER PLACING YOUR ORDER, PLEASE SEND US AN EMAIL WITH THE BOLT HEAD and BOLT KNOB YOU NEED WITH THE ORDER NUMBER.

The titanium action's model number will be Ti3-(X)A and will be available in short, medium and long action lengths. This product will be similar to the Origin line of actions as it will only have options for length, operating side, bolt face and bolt knob. It will come standard with a magazine well that will accept Wyatt's extended boxes for people wanting to use hinged floor plates as well as accepting AICS pattern magazines and M5 bottom metal for those wanting to use detachable box magazines. The magazine well will also accept Hawkins Precision's Hunter DBM in all three lengths without modification. The titanium action will come standard with our trim tang (same as Origin actions) and a two piece, pinned 20 MOA rail. No other rail options will be available.
This receiver will come with DLC coating and with the same bolt system that our TL3 and SR3 actions use. There will be no differences in the bolt from the existing platform so production hurdles are minimized. Barrel tenon length will also be the same as current TL3/SR3 barrel tenon length so the Ti3 will use the same barrel systems as the TL3 and SR3 actions use today.
In summation, the Ti3 will be available with the following feature set:
- 6Al-4V DLC coated titanium receiver (short, medium and long lengths available) standard with ZAI's trim tang
- DLC coated floating and interchangeable bolt head (same as current centerfire bolt heads) in 223, PPC/SPC, Standard and Magnum sizes
- Controlled round feed
- Mechanical ejection
- Bayonet style firing pin assembly (same as TL3/SR3 system in all lengths)
- Nitrided bolt body
- Two piece, pinned aluminum 20 MOA rail (able to be replaced with Hawkins Hybrid or similar ring system)
Short actions have been weighed at 22.2 ounces as compared to a TL3-SA at 31.5 ounces in the standard, stainless configuration. Medium actions are 23.1 ounces compared to TL3-MA at 33.4 ounces and long actions are 24.0 compared to TL3-LA at 34.8 ounces.